The normal image of Arizona for many people will be the desert, majestic rock formations and probably heat. Arizona holds many unusual and unexpected sights and sounds when you begin looking beyond the ordinary and expected.

1) Eagles fans will appreciate the “Standing on the Corner Park” in Winslow, Arizona. Here you will find a life-size bronze statue of a guitar player, and a trompe-l’oeil mural showing the reflection of the flatbed Ford in a store window. Winslow had been one of the largest cities in Arizona until Route 66 was no longer the main thoroughfare. A local foundation created the corner park  to bring traffic back through Winslow. 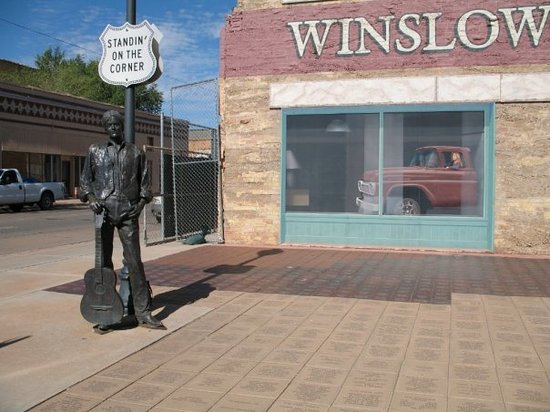 2) London Bridge is NOT where you might expect. In 1968, the City of London sold the famous bridge to an American. Today, the 950 foot bridge spans a manmade canal that cut through a peninsula on Lake Havasu. Come for the bridge but stay for the boating, beaches and other outdoor activities available around the area.

3) They yabba, dabba do have dinosaurs in Arizona. At least 15 species of dinosaurs once roamed Arizona and left tracks across the state (most famously the Moenkopi Tracks outside of Tuba City). But forget stuffy museums and geological tours. Go for the kitsch. Take $5 and visit the Flintstones Bedrock City  in Williams, Az. At this old-style park, you can slide down a brontosaurus and ride in a Flintstone mobile tram. This photo of Flintstone’s Bedrock City is courtesy of TripAdvisor

Over in Holbrook, Arizona, seven dinosaur statues (ranging from just a few feet up to 25 feet in height) sit in front of the Rainbow Rock Shop, and  just south of town, eight more of the creatures stalk Jim Gray’s Petrified Wood Company.

4) Travelers across the southwest are familiar with the occasional cow lumbering across the road, but in Oatman, AZ, wild burros roam the streets and interact with tourists. The burros are descendants of the beasts of burden used by the gold miners who once worked the area. Oatman is on old Route 66, just southeast of Laughlin, NV. As well as being famous for their burros, the burg is home to old West gun fights, January bed races, and the annual 4th of July Solar Egg Frying Contest.

5) Tucson, Arizona offers a graveyard of a different kind. The “Boneyard” or  the Aerospace Maintenance and Regeneration Group (AMARG)  is home to thousands of aircraft from throughout the years. The facility houses more than 4,400 aircraft and 13 aerospace vehicles from the all U.S. military branches, and several federal agencies including NASA. It is part of the Davis-Monthan Air Force Base, so to get close to the planes; you will want to take the Prima Air and Space Museum bus tour (the bus will not stop but you will get a closer view of all the planes). Some of the boneyard aircraft get a new life in the project, Round Trip: Art From The Bone Yard Project. The project takes planes and puts them in the hands of contemporary artists who re-image elements of the aircraft as works of art. You can see works from the exhibit around the museum grounds.

The limits of what you can find in Arizona seem only to be your imagination. Located just under two hours southeast of Phoenix, Tucson is the ultimate destination for boomers that are looking for a little more room to roam. And between the old west heritage and the modern day spas and golf courses, there is so much to love about Tucson. The city is also known for legendary sunsets … END_OF_DOCUMENT_TOKEN_TO_BE_REPLACED Trilogy® Vistancia near Phoenix recently held a Grand Opening for seven new model homes. Couldn’t make it to the Grand Opening? Don’t worry, we’ve got you covered! Check them out in the video below: Located in Phoenix’s Northwest Valley and the centerpiece of America’s Best Planned Community, this vibrant resort community enjoys a pristine desert … END_OF_DOCUMENT_TOKEN_TO_BE_REPLACED When you visit communities to figure out which one you want to live in, one of the most important things you could possibly do for yourself is talk to as many people who actually live there as possible. This is best accomplished if you are taking advantage of the “Stay and Play opportunities” that many … END_OF_DOCUMENT_TOKEN_TO_BE_REPLACED